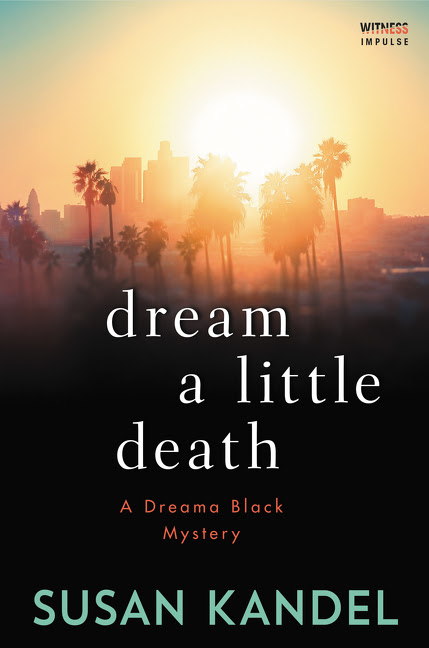 The first time I set eyes on Miles McCoy, I worried he might try to eat me. He was the size and girth of a North American grizzly, with long, silver-tipped hair, a long silver-tipped beard, and small dark eyes that bore into me like I was a particularly fine specimen of Chinook salmon. It couldn't have helped that I'd used a honey scrub the morning we met. I should've known better. Not just about the scrub, but about a lot of things.
Like braving the freeway during rush hour.
Like thinking you can't get a ticket for parking at a broken meter.
Like racing up to his penthouse in gladiator sandals, and expecting not to twist an ankle.
Like watching his fiancée shoot herself, and assuming it was suicide, instead of murder.
Meet Dreama Black. A 28 year-old, third-generation groupie trying to figure out who she is after being publicly dumped by the rock god whose mega-hit, "Dreama, Little Dreama" made the name and the girl world-famous. Now Dreama supports herself by running custom-designed, themed tours of her hometown of L.A. When she is hired by a Raymond Chandler-obsessed rap producer to create a "L.A. noir" tour as his present to his soon-to-be bride, Dreama gets pulled into the middle of a possible murder, corrupt cops, and an unforgettable pair of femme fatales.

An Agatha, Edgar, and SCIBA nominee, Susan Kandel is the author of the nationally best-selling and critically acclaimed Cece Caruso series, the most recent of which, Dial H for Hitchcock (Morrow), was named by NPR as one of the five best mysteries of the year. A Los Angeles native, she was trained as an art historian, taught at NYU and UCLA, and spent a decade as an art critic at the Los Angeles Times. When not writing, she volunteers as a court-appointed advocate for foster children, and loves to explore secret, forgotten, and kitschy L.A. She lives with her husband in West Hollywood.


Here's Your Chance to WIN!

This is a rafflecopter giveaway hosted by Partners in Crime Virtual Book Tours for Susan Kandel and Harper Collins. There will be 5 winners of one (1) eBook copy of Dream A Little Death by Susan Kandel. The giveaway begins on May 23rd and runs through June 27th 2017

Posted by Bookalicious Traveladdict at 04:00