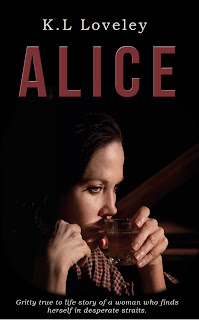 Alice is near breaking point. Floods have left her beautiful dream home a damaged mess, her step children's lack of respect is giving her migraines and, worst of all, her husband is giving her no support to lean on. Her life is slowly spiralling out of control.
When Alice's daughter, Anne Marie, repeatedly falls victim to aggressive vandals, Alice finally can take no more. She decides to take control of the mess that has become her life, and finally frees herself from the chaos that has been bringing her down.
Freedom, however, isn't as sweet as Alice first thought it might be. She finds herself yearning for something she can't quite put her finger on. In her quest to find it, Alice finds herself turning to drink
EXCERPT

A ray of light found its way through the fraction of a gap in the badly closed bedroom curtains; this was enough stimulation to rouse Alice from yet another night of restless sleep. She could feel the light penetrating her tightly closed eyelids, beckoning Alice to open her tired bloodshot eyes. She was in the twilight zone, between sleep and waking, her mind still charged with the emotions of the traumatic dreams which consumed her restless over-active mind. Her eyelids appeared to be the only part of her body she could consciously connect with, and the sheer effort of opening them was paramount to a movement against the force of gravitational pull as the first spectrum of light penetrated the tiny slit of exposed cornea between upper and lower lids. Alice not only felt the ache behind her eyes, but also the deep-rooted pain from the tight muscle fibres, across her shoulders, radiating down bilateral sides of her neck, burning deep into the tissues and exciting the nerves into spasm.

A quiet groan escaped from her parched lips as Alice gingerly propped herself up in bed, gently resting her head and shoulders against the supporting pillows. She looked at the clock on her bedside table. It was seven fifteen, much too early to be rising on a Sunday morning. Alice swung her legs over the edge of the mattress, trying not to disturb her husband Robin, who was sleeping soundly beside her. He looked so peaceful and settled, not a care in the world, thought Alice, he was stretched out with his feet hanging out of the bed, no doubt to cool them down from the heat of the duvet.

Making her way to the bathroom as quietly as possible, she closed the bathroom door. A light breeze was blowing the window blind, sucking the blind backwards and forwards towards the open window. Alice shuddered. The sound of the toilet flushing disturbed Robin from his sleep. He called out to his wife, enquiring if she was okay. He was well aware of her restless sleep, for unknown to Alice, her constant tossing and turning disturbed him also, although he was fortunate enough to slip back into sleep quite easily.

Robin knew the source of his wife’s tension and how she struggled to cope with the daily family dramas and the increasing responsibility she endured at work. Robin understood how difficult life had become at home. Indeed, he was well aware of the difficulties and trials and tribulations that Alice endured with his family. He had witnessed this first hand and was well aware how much worse the situation was for Alice when he was not around. Lately, he too, had felt the rising tensions in the family home and was frustrated because he knew that sooner or later, Alice would approach him to try and initiate a serious discussion about their present predicament and their future. Predictably of course he would try and avoid the situation using any excuse he could muster. Robin had tried this approach with her many times in the past, but Alice could be like a dog with bone; sometimes she would not let go. He also knew her to be a woman of her word and if she made a promise or commitment, she felt duty bound to undertake her obligation and would let nothing stand in her way. He hoped she felt the same determination with respect to her wedding vows no matter how much she was put to the test. He consciously tried his best to help make the situation less difficult for his wife, but in doing so he often overcompensated for his children who possessed no sense of teamwork and took full advantage of the lifestyle he and Alice provided. But today was Sunday, he and Alice had worked hard all week and he wanted to show her just how much he loved her. “I’ll bring you a mug of tea then have a nice soothing shower,” said Alice as she slipped on a soft towelled bath robe and her mules which she had purchased during a spa hotel holiday they had enjoyed in Turkey two years previous. Robin watched Alice as she climbed out of bed, wearing her black satin camisole with tiny shoe string straps. He admired her petite body and her long, tousled hair which, this morning, was shining and healthy. Her femininity was so appealing. He thought back to the time when they first met, ten years ago. Alice was just getting over the traumatic divorce from her first husband, after twenty-two years of marriage. It had been a difficult time for her, discovering the infidelity and betrayal of a husband she had trusted and loved. Because of this trauma, Alice had lost a lot of weight and was only seven stone when they met and, although in proportion, he was worried that if she took ill, there was no weight on her to sustain her and keep her strong. Robin had lost his first wife to leukemia and was well aware of the need to keep healthy and strong. Around the time of Alice’s discovery of her husband’s affair and the end of her marriage, Robin’s life had been thrown into pain and despair with months of worry and sadness, finally leaving him with the loss of his beloved wife and the mother of his four children, Gary, Wayne, Stephen and Julie.

Alice had helped Robin come to terms with his loss while trying to overcome her own emotional rollercoaster.

Alice had found it difficult at first, to trust another man, but with the help of her friends she had gradually grown accustomed to the dating game which was new territory for her. She had been sixteen when she met her first husband and although she had previous adolescent relationships, they had mostly been with old school friends whom she had felt safe and comfortable with. In any case, more often than not she had usually socialized in groups. Alice had been courting her first husband five years when they married. It was the accepted progression of relationships in the early 1970s.

Courtship, engagement then marriage before the age of twenty-five. Alice was only a few weeks from her twenty first birthday when she married. Most of her friends were already married with children. It was considered a worry to young women in her village not to be married by the age of twenty-five. However, having a family was another matter. They waited five years before deciding to become parents. Mathew was born into a well prepared loving family and three years later he had a sister, Anne Marie, making their family complete.

Years later when Alice looked back at the pictures of herself post marriage break up and compared them to the happy family photographs with her children. She saw a frail, sad looking creature, caught on the camera as opposed to the happy family pictures of the many holidays and special occasions they had shared together. It was in this post traumatic period of her life when Alice ventured out into the unknown territory of singleton.

The very first time she went out with her friends was to a well-known local singles bar. Alice felt uncomfortable the moment she entered the smoke-filled room. Her first impression was to liken the venue to a cattle market full of many cows and a disturbingly equal number of bulls. The cows were dressed up like male peacocks strumming around with their full plumage on display. Everyone stood shoulder to shoulder already making body contact with whoever happened to be standing either side, men waved £20 notes in the air trying to catch the attention of the obviously overworked bar staff, shouting their drinks orders above the noise of the crowd and the music.

The one and only saving grace of the night for Alice was the music as the gravelled voice of Rod Stewart singing “Maggie May” rang out above the buzz of the crowd. Alice wondered how she was going to squeeze in amongst this circus, but somehow along with her friends she did, and half an hour later, she was stood pressed against a wall with a large glass of red wine in her hand, holding on to it tightly for fear of being elbowed and spilling it down herself, or even worse, one of her friends. Not used to flirting and chatting to strange men that first experience as a new forty something single had been hellish for her.

My god, thought Alice, is this going to be my life from now on? Standing in a cattle market being looked up and down like a prized Heifer? The thought had kept her awake for many a night, reinforced by the knowledge that her now ex-husband was sleeping soundly with the new woman in his life who he had chosen over herself, and she surrendered to the fate of an uncertain future.

Her friends, of course, had observed Alice’s distress and how she had stood uncomfortably first on one foot then the other, fidgeting all night like a virgin in a brothel. The following week her friend Kay organised a girls’ night in, which turned out to be an evening of enlightenment for Alice as they each discussed their own personal problems and fears they had encountered on their own early step into singleton. Apparently, Alice had been giving off the wrong signals with her body language and demeanor which could be interpreted as “don’t come near me. I’m not available”. Alice explained she didn’t feel available. What she had felt was vulnerability for any gold digging lothario who might fancy their chance. Her friends tried to reassure Alice that she wouldn’t always feel that way and perhaps next time they all went out together, she may take on board what they had said. Relax a little more and enjoy the evening

K.L Loveley is a contemporary fiction author from Nottinghamshire, who writes gritty, realistic novels which tackle medical and social issues. 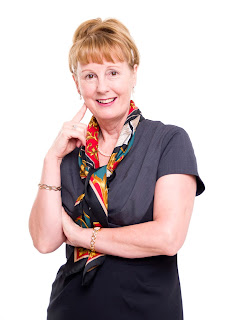 The author has enjoyed a successful 47-year nursing career with the NHS, during which she acquired vast skills. She has transferred her medical knowledge, and incorporated her excellent human observation skills into writing interesting stories about people affected by social and medical issues.
Her debut novel, ‘Alice’ tackles alcoholism head-on, and presents the reader with an empathetic account of a spiralling addiction and the resulting pattern of hopelessness that many fall into.
Buying links:
Amazon UKAmazon USA
WaterstonesFoyles
Book depositorySmashwords
Telegraph bookshop 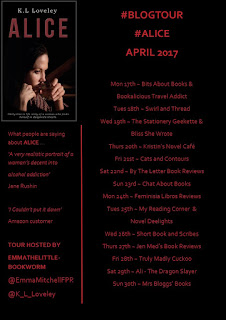 One lucky person will win the following #GoodieBag!!

a Rafflecopter giveaway
Posted by Bookalicious Traveladdict at 04:47