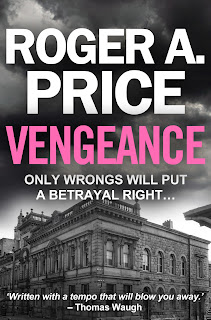 Blurb:
Jack Quintel is a hit man. When a job comes in to kill the Deputy Chief Constable of the Greater Manchester Police Jim Reedly, he contracts it out to a new guy, Charlie Parker. Watching in the shadows, Quintel sees Parker shoot out Reedly’s windscreen, then drag him into the woods and thinks the job’s been done. But when Parker tries to pass off a pig’s heart as Reedly’s, things start to go very wrong. Jack’s right hand man Jason kills Charlie, who it turns out is an undercover police officer.
Detective Vinnie Palmer is with the Preston police. He was called in when they received the information about the impending hit. Now he has to figure out how to clean up the mess. And he wants whoever killed Parker bad. He finds the man who put Parker in touch with Quintel, a low life hood named Dempter, living in an estate in Preston. He doesn’t know much, but motivated by money, agrees to be an informant for the police.

Christine Jones is a TV reporter. She and Vinnie had worked together before, chasing a serial killer. They meet again at the warehouse where Charlie was killed, and realise their relationship could be more than professional. But first, Christine wants to know what’s happening. Vinnie agrees to keep her in the loop.

Meanwhile, Christine is working on a documentary about positive discrimination against non-Catholic officers in Northern Ireland since the peace process. She makes contact with a former police officer in Northern Belfast named Paul Bury, who feeds her some of the information she needs.

Meanwhile, as the bodies start to pile up in Preston, there’s another attempt on Reedly’s life, when a grenade is thrown at him at his brother in law’s funeral.  As Vinnie fights to keep Reedly alive, suddenly Christine’s life is in danger. And they both start to wonder if the contract against Reedly has anything to do with her documentary on Northern Ireland. But how could it?
Filled with twists and turns and gritty detail, this is must read for crime fans everywhere.

Jack Quintel didn’t need to be here, he’d requested his usual proof of death, but as he hadn’t used this killer before, he wanted to see it for himself. It took him a while to find a spot among the trees, and he was conscious of not flattening too many bluebells that were everywhere at this time of year. He knew the killer Charlie was no mug, nor was the target, Jim Reedly. If all went well Quintel planned to use Charlie again. The last thing he wanted was for him to realise he’d been here checking up on him; after all, he’d asked for his normal, if not unusual, evidence that the job had been done. He just wanted to satisfy himself, and watch the killer’s craft. Enjoy the show. It was starting to go dusk so that would help; he just hoped Reedly wasn’t late home and it became too dark - he knew that wouldn’t bother Charlie, but he was beginning to wish he’d brought a pair of night-vision glasses.
It took a couple of minutes to settle himself as he took in the surroundings. The house was a fairly new build, but a grand affair nonetheless, detached in its own grounds with a tree-lined private driveway – the privileges of rank. Its location was handy though, Fulwood was an established district of Preston and had more than its share of such houses – especially on the eastern side of the city where a lot of the newer builds were situated. It wasn’t far away from the industrial unit Quintel had hired, or had had hired for him. That was in a traditional brown field estate behind a newish built Asda supermarket. Perfect; as it backed onto the M6 motorway. Quintel always liked an emergency egress from anywhere he used; he was cautious, he had to be.

Quintel passed the time trying to fathom out where Charlie would be. He guessed somewhere where the car would stop, somewhere near the house-front. He could see a turn-around in front of the property which would seem to be the obvious place, but he couldn’t see Charlie, which wasn’t entirely surprising, given the circumstances. He just hoped his suspicions were ill-founded; it was not that easy finding a good assassin. You couldn’t just type ‘killer wanted to join enthusiastic team’ into an internet search engine, well, not without a world of trouble landing on you. It was just that he had learned long ago not to ignore his hunches; he wouldn’t have reached his forties if he had.

The setting sun was dropping behind him now so he made sure he had good cover behind the oak trees. A peaceful vista, which was about to be shattered. He couldn’t help but inhale the spring fragrances which were all around, in what was soon to become a place of carnage – he enjoyed both.

Two main offenders; One secret boss; several targets and lots of mysteries....... this book has all this and more. Full of intrigue and mystery.

I instantly warmed to the characters Vinnie; a Police Inspector and Christine; a local TV investigative reporter.

Vinnie had made it his mission to find out what (or who), two hit men for hire, Quintel and Jason, were targeting. Especially after he witnessed an undercover Officer, one of his own, killed.

This was a fast paced novel, and there were two stories running alongside each other. Christine was investigation a Political story line. The stories seamlessly joined together towards the end. There were several mystery characters along the way you had to try in your head and identify. They could have been anyone. Who would you trust? I thoroughly enjoyed this; even the political aspect of the novel, which is something I would not normally read, but would certainly pick up now.

My name is Roger A. Price a crime fighter turned crime writer. I used to right the wrongs but 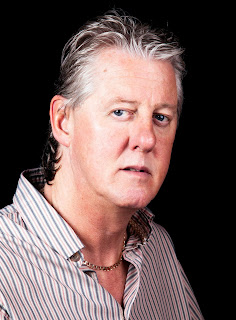 now I write the wrongs. Ok, enough with the puns, but I do love language and playing with it, I guess all writers do.

I spent over thirty years in the police retiring as a detective inspector in charge of a covert undercover drugs unit which achieved national acclaim. I served on various units and squads and saw service across the UK, Europe and beyond. I can't write about those events but I can base my crime fiction writing from my many experiences of them. Some of which were good, some not so good.

My first two novels are in the 'Burrows and Lee' series; 'By Their Rules' and 'A New Menace' and chart the adventures of Jane Lee and John Burrows in their work for the secretive 'Special Projects Unit' where they take on the bad guys with no rules of engagement.

'NEMESIS' is the first in the new 'Badge and the Pen' series which follows the fortunes of detective inspector Vinnie Palmer who finds an unlikely ally in TV news reporter Christine Jones, as they chase common threats but from very different agendas. This book was an Amazon Bestseller for a while in Canada and Australia and has received rave reviews in the UK.

‘VENGEANCE’ is the second outing for Vinnie and Christine in the ‘Badge and the Pen’ series where they both face the most unlikely of threats, as they race to save lives.

I have also had a couple of short stories published and am trying to write for TV whilst currently also working on my next Badge and the Pen novel. 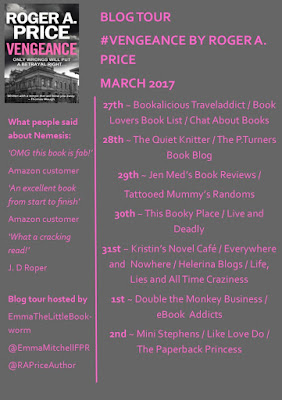 a Rafflecopter giveaway
Posted by Bookalicious Traveladdict at 04:30